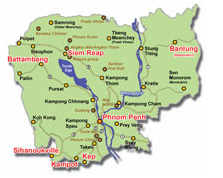 The Kingdom of Cambodia is one of the worlds newest and most exciting travel destinations. After years of isolation, Cambodia opened to tourists in the mid-1990s and tourist's numbers have increased every year since - last year the country seeing near two million tourists. Cambodia’s primary tourist destinations - Angkor Wat and the other temples of Angkor near Siem Reap, the cultural attractions in the capital Phnom Penh, and the beaches of Sihanoukville - offer plenty of accommodations, restaurants and other tourist services. Other destinations such as the hill tribe areas of Ratanakiri and Mondulkiri, the remote temples of Preah Vihear and Banteay Chhmar, and quaint provincial capitals such as Battambang and Kampot, are just now being discovered by travelers, and all offer unique glimpses of 'unspoiled' Cambodia.

Cambodia is a land of superlatives. The ancient temples of Angkor Wat, Bayon and other ruins of the Khmer Empire rank amongst the world's grandest and most magnificent World Heritage Sites - easily in a class with Machu Picchu, the Pyramids of Egypt and Teotihuacan. But this magnificence stands in shocking contrast to the Killing Fields, Toul Sleng Genocide Museum and other remnants of Cambodia's more recent history - a time when Pol Pot and the Khmer Rouge regime of the late 1970s committed some of the most horrifying atrocities of the 20th century. Yet, the Khmer people, who make up more than 95% of modern Cambodia's population, impress visitors as some of the friendliest, 'happiest' (sabai), and most gentle people they have ever met. The ubiquitous Khmer smile is legendary, as is traditional Khmer hospitality and openness. Cambodia is truly a land of light and dark, of wonder and of tragedy - awe-inspiring, heart wrenching and completely unique.

Visit the Ministry of Tourism for more information about travel to Cambodia.

We are here to help our customer any time. You can call on To Answer Your Question.